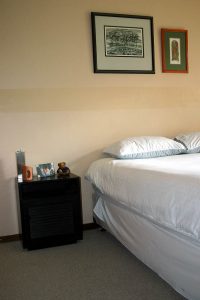 In Commonwealth v. Judge, the Appeals Court affirmed the allowance of the defendant’s motion to suppress the fruits of a routine home visit by his parole officer.  The Court’s decision rested on the grounds that the officer “lacked reasonable suspicion to enter the [defendant’s] bedroom,” and that the entry could not be justified as an administrative search.

The basic facts were as follows. The defendant was released from incarceration in a house of correction and placed on parole…. The parole manual indicated that the defendant’s … parole officer would visit him ‘at home, work, school or other place in the community with or without notifying [him] in advance.’…. The manual is silent as to the frequency, duration, or scope of routine home visits.” On the day in question, “the defendant’s primary parole officer [Lyons] and another parole officer [Valenti] arrived at the defendant’s residence in order to conduct a routine home visit, and knocked on the front door. After a pause of between thirty seconds and one minute, Lyons heard the defendant say, ‘Hold on.’ After another minute, the defendant’s girlfriend, who appeared uneasy and confused, opened the door and the parole officers entered the home. The defendant emerged from the bathroom after about ten seconds, and Lyons escorted him back to the bathroom to provide a urine sample for drug testing.” “Valenti entered the [defendant’s] bedroom and observed razor blades, a digital scale, a white rock-like substance he believed to be ‘crack’ cocaine, and multiple small plastic bags of a substance he believed to be heroin, all in plain view on a dresser. The defendant was subsequently arrested.” After the return of indictments against him, he moved to suppress the seized items and the judge allowed the motion. The Commonwealth filed an interlocutory appeal.

In its decision, the Appeals Court stated, “Though parolees have a significantly diminished expectation of privacy in their homes, their privacy interest is not extinguished. See Commonwealth v. Moore, 473 Mass. 481, 487 (2016). The warrantless investigative search of a parolee’s home is accordingly reviewed using ‘the reasonable suspicion standard associated with stop and frisks.’ Id. at 488.” Here, stated the Court, “[a]ssuming without deciding that the parole officers had reasonable suspicion to believe that the defendant had violated the conditions of his parole based on [the delay after the officers knocked at the door], the search of the bedroom remained unreasonable because the scope of the search … exceeded that justified by any suspicion raised by the circumstances.” “The arguable inference arising from [the defendant’s delay in emerging from the bathroom] is that [he] had attempted to conceal contraband in the bathroom or on his person, or that he had attempted to destroy contraband while in the bathroom. The facts, however, provide no reason to believe that the defendant had secreted contraband in his bedroom.”

In addition, the Appeals Court rejected the Commonwealth’s contention “that entry into the defendant’s bedroom was permitted even without reasonable suspicion because routine parole home visits qualify as an exception to the Fourth Amendment … and art. 14 of the Massachusetts Declaration of Rights as special needs or administrative searches.” “To survive constitutional review, however,” such a search (for example, a sobriety checkpoint roadblock) “must be noninvestigatory and conducted pursuant to standard, neutral procedures” “that limit[] both arbitrariness and the discretion of the officials conducting the search.” The Court concluded that “[i]n the case at bar, the Commonwealth … failed to introduce any internal parole board policy guiding parole officers” as to “whether a tour of the entire home is mandated during [routine home] visits.”

If you or a loved one is facing similar circumstances, you will need a skilled and experienced attorney to assess whether you have a motion to suppress and persuasively litigate any such motion.  Attorney Daniel Cappetta has successfully argued many motions to suppress and always gets the best possible results for his clients.  Call him for a free consultation today.