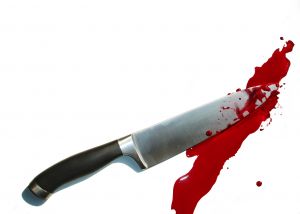 A Framingham woman was arraigned on November 18th on charges of assault and battery with a dangerous weapon. According to an article in the MetroWest Daily News, the woman stabbed her boyfriend in the hand. The article specifically alleges that the police were called to the woman’s apartment building and found her boyfriend outside. Her boyfriend’s hand was bleeding heavily and the police followed a trail of blood from him to the woman’s apartment. The police made contact with the woman, and observed blood on her when they arrived. The boyfriend told police that he was visiting the woman and that she became angry when she saw postings on his Facebook page from his ex-wife. The boyfriend reported that the woman went into the kitchen, retrieved a knife, and sliced his hand. The woman apparently denied any wrongdoing, telling police that her boyfriend came to the house with the injury and that she refused to let him in. At the arraignment, the woman’s attorney represented that she had sustained a large cut on her back. The woman’s attorney also argued that she was trying to protect herself, and that she had been acting in self-defense.

Given the circumstances, the woman may well have an argument that she was acting in self-defense. First, she sustained what appears to be a fairly significant injury to her back. The fact that the wound was on her back supports a self-defense argument, as the injury indicates that she was trying to get away when she was hurt, rather than initiating any physical altercation. Further, the article does not indicate that the boyfriend called the police and/or that he sought medical attention, which also suggests that he may have been involved in some sort of unlawful activity. Moreover, the fact that the police observed some blood on the woman and a trail of blood between her boyfriend and her apartment is not inconsistent with a self-defense argument, as the blood found on the woman may have been her own, and her boyfriend may have been fleeing the scene to escape arrest for his own wrongdoing rather than for anything the woman may have done. Lastly, the woman’s attorney could fairly easily explain to a judge or jury that the woman’s statement to police that her boyfriend was injured when he arrived was merely the result of fear of what her boyfriend would do if she told the truth, and/or a misunderstanding of her right to defend herself.

If you or a loved one is charged with physically assaulting a person and the altercation was in fact mutual, or initiated by the other party, you will need an experienced attorney who knows about the various defenses that can raised, and who is skilled in implementing such defenses. Attorney Daniel Cappetta is well versed in both the law, and its implementation. Call him for a free consulation.