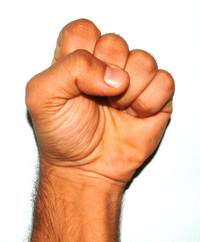 According to an article in the MetroWest Daily News, a thirty-two year old Milford man got into a physical altercation with his eighteen year old niece earlier this week. The article states that the niece had been kicked out of her mother’s house and was staying at her grandmother’s house. At some point during her stay, the niece began yelling at her grandmother and her uncle, who was present during the argument, stepped between the two in an attempt to diffuse the situation. According to the uncle, the niece punched him twice in the face and he then reportedly punched her once. The niece allegedly had a broken nose as a result of the incident. It’s not clear whether the uncle had any injuries. Police arrived on scene and arrested the uncle, charging him with domestic assault and battery. The niece was summonsed to court on the same charges that same day.

Regardless of who should be blamed for the incident, it appears to be unlikely that the Commonwealth will be able to successfully prosecute either party.  The uncle and niece are considered “cross-complainants” – this means that although they are both charged in the alleged incident and are therefore defendants, they are also both the alleged victims and necessary Commonwealth witnesses. The prosecution of these types of complaints is somewhat complicated because both parties have potential Fifth Amendment privileges. The Fifth Amendment states that a person cannot be compelled to testify against him or herself if that testimony may be incriminating and/or if it could result in the person’s criminal prosecution. The Commonwealth would presumably seek to call the uncle to the stand to testify against his niece, and would also presumably seek to call the niece to testify against her uncle. Because the niece and uncle are facing criminal charges themselves, however, they both appear to have a Fifth Amendment privileges and could therefore refuse to testify against the other. While both the uncle and niece could choose to waive their Fifth Amendment privileges and testify, this doesn’t typically happen; cross-complaint cases tend to be dismissed, as people generally do not want to waive their respective privileges and take the risk of their testimony being used against them in their own criminal case.

No matter what the uncle and nieces choose to do, they will both need the assistance of a skilled defense attorney who can properly advise them of their options, and the risks and benefits of exercising these options.  Likewise, if you or a loved one has gotten into a physical altercation with a family member that resulted in the issuance of criminal charges, you will need an attorney who has experience dealing with the complications in domestic cases, and who understands the issues that arise within the family as a result.  Attorney Daniel Cappetta has handled numerous domestic cases and knows both the law, and the various defenses that can be asserted.  Call him today for a free consultation.