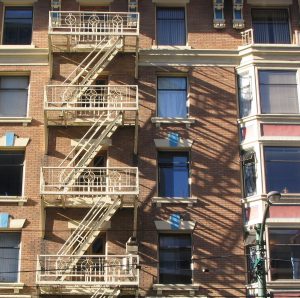 In Commonwealth v. Arias, the Supreme Judicial Court affirmed the suppression of drugs seized from the defendant’s apartment on the grounds that the warrantless search of the apartment was not justified under either the emergency aid exception or the exigent circumstances exception to the warrant requirement.

The basic facts were as follows. The Lawrence police department received a tip from a 911 caller, who “stated that … she saw two ‘Spanish guys’ ‘with a gun … going up to the [apartment] building’ located at [a designated address]…. The caller ‘heard … one of [the men] load the gun,’ and saw the men enter the building.” The dispatcher disseminated the information provided by the caller and “[m]ultiple police officers responded to” the building described in the dispatch. The multi-unit “building contained two apartments on the ground floor, numbered ‘5A’ and ‘7A.’” “At the front of the building, [Sergeant] Simard spoke to residents of unit 7A…. [They] … denied seeing or hearing anything out of the ordinary, and said that they did not know who lived in unit 5A…. After obtaining the telephone number of the 911 caller [from the dispatcher], Simard spoke with her by telephone. [She] told Simard that she had seen three males [not two as she had said in her 911 call] … talking [calmly] on the front step of the building…. [She also told Simard] that the men likely had a key to the building because they entered the front door ‘easily.’” At some point, “[a]t the rear of the building, [Sergeant] Cerullo observed a Hispanic male leave the building [through a] door.” The man did not fit the 911 caller’s description of the men she had observed entering the front door. “With his firearm drawn, Cerullo shouted, ‘Lawrence Police. Show me your hands.’” The man “appeared ‘shocked’ and ‘quickly went back inside’ the building…. Cerullo … attempted to enter the building through the door [the man] had used, but” it was locked. Subsequently, Cerullo and Simard decided to enter unit 5A without a warrant. Inside the unit, they conducted a protective sweep “for any injured persons and the Hispanic male [whom Cerullo] had seen … at the rear of the building…. They did not find any people, but they did observe in plain view what appeared to be illegal narcotics” and drug paraphernalia. Based on these observations, the police obtained a search warrant pursuant to which they seized items from the apartment, which turned out to be the defendant’s residence. After the issuance of indictments against the defendant, he filed a motion to suppress evidence seized pursuant to the warrant, on the ground that the warrant was predicated on observations made during an unconstitutional search.” The motion was allowed and the Commonwealth filed an interlocutory appeal, arguing that the warrantless entry into the apartment was justified under the emergency aid exception and the exigent circumstances exception to the warrant requirement.

In its decision affirming the allowance of the defendant’s motion to suppress, the SJC first ruled that the emergency aid exception to the warrant requirement was not applicable because “[t]he totality of the circumstances at the time of [warrantless] entry did not establish a reasonable basis to believe that an emergency existed in unit 5A.” “When the officers arrived at the scene …, they [did not see or hear any] signs of disturbance, and detected no signs of forced entry…. Moreover, Sergeant Cerullo’s observation of the Hispanic male “at the back of the building [did] not transform the situation into an emergency. There was no indication that [the man] was injured, in need of emergency assistance, armed, or about to harm others, or that he had harmed others.”

Regarding the other exception to the warrant requirement relied upon by the Commonwealth, the SJC ruled that “for the same reasons that the officers lacked objectively reasonable grounds to believe that residents of unit 5A were in danger, pursuant to the emergency aid doctrine, the officers lacked a reasonable basis to believe[,] … pursuant to the exigent circumstances doctrine,” “that [the residents] were at risk of imminent harm.” Moreover, because many police officers were at the scene, there was little likelihood that a suspect could flee from within the house, and there was no basis for the officers to believe “that evidence of an armed home invasion or hostage situation was at risk of destruction.” Furthermore, in the Court’s view, “[e]ven had the officers reasonably believed that an exigency existed, for the warrantless entry to be permissible, there also had to be probable cause that a crime was being committed inside the building.” In the Court’s view, probable cause was lacking because under the two-prong Aguilar-Spinelli test, the 911 caller’s tip was not sufficiently reliable — some of the details in her original call changed when she later spoke to Sergeant Simard — and the circumstances encountered by the officers at the scene did not corroborate the tip.

If you or a loved one is in a situation where the police obtained evidence against you as the result of a search and seizure, you will need an attorney to fight to suppress that evidence. Attorney Daniel Cappetta is an experienced and skilled attorney who has litigated numerous motions to suppress.  Call him today for a consultation to determine whether you have a strong motion that should be litigated.