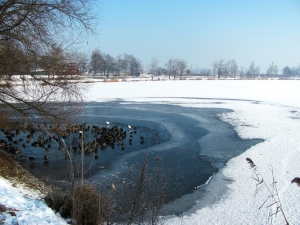 A Sudbury man, who police have not yet identified, allegedly drove his car into Willis Pond on Thursday, January 24th, according to an article in the MetroWest Daily News. Police have alleged that the 27-year-old man was drunk when he drove out onto the ice. The front end of his car reportedly broke through the ice approximately 600 feet onto Willis Pond at about 12:45 a.m. Police are reportedly unsure what motivated the man to drive his car onto the ice.

The driver and a female passenger were reportedly pulled from the Toyota and taken to Emerson Hospital as a precautionary measure. Firefighters reportedly attempted to pull the car out of the pond but were unsuccessful. A towing company reportedly worked for nearly 17 hours before the car was successfully pulled out of the water. The Toyota reportedly was back on solid ground around 4:30 p.m.

The driver is facing charges of driving a recreational vehicle under the influence of alcohol and wanton destruction of property. Because the driver was not operating the vehicle on a street at the time police arrived, the police are charging him with driving a recreational vehicle, rather than operating a vehicle under the influence of alcohol. Police are reportedly charging him with wanton destruction of property based on the destruction of the car. Police reportedly said that the driver’s name would be available after the arraignment.

The driver is facing serious charges that could lead to fines and jail time. Because his car was not found on a street, the driver avoided a charge of operating a vehicle under the influence of alcohol. The charges he is facing are still quite serious, nonetheless. The driver needs a skilled Massachusetts criminal defense attorney to help him fight the charges he is facing.

In order to prove the charge of driving a recreational vehicle under the influence of alcohol, the prosecutors will have to prove that the driver operated the vehicle while having an intoxicating substance in his body beyond a reasonable doubt. The Commonwealth can establish that he was under the influence of an intoxicating substance by means of a blood test, Breathalyzer, or other test. The Commonwealth does not have to prove that he operated the vehicle on a public roadway. To prove the charge of wanton destruction of property, prosecutors will have to establish that the driver damaged or destroyed the personal property of another, that he did so wantonly, and that the amount of damage inflicted is more than $250. “Wanton” acts are acts committed recklessly or indifferently to the fact that the conduct will probably cause substantial damage to property.

If you or a loved one is facing a charge of destruction of property or an OUI or similar charge, you need an experienced and capable Massachusetts criminal defense attorney on your side. An attorney can help you fight for your freedom or negotiate a favorable plea deal with the prosecution.

If you are facing an OUI or destruction of property charge, contact me today at Cappetta Law Offices today.