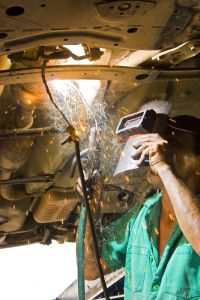 A Marlborough man was arrested Friday, August 30th, according to an article in the MetroWest Daily News. The man was reportedly arrested at approximately 4:30pm at his place of employment – Sudbury Automotive – after an 18 year old woman reported that the man pulled his pants down in front of her while she was at the garage. The woman also claimed that the man showed her his underwear and then reached into her skirt and groped her through her underwear. As a result of these allegations, the man was charged with one count of indecent assault and battery.

The man does not appear to have made statements to the police regarding the allegations, and it is unclear what his side of the story is. At his arraignment on September 3rd, however, he pled not guilty and was released on $1500 bail. He is due back in court on October 17th for a pre-trial conference.

The defendant may claim that the alleged incident didn’t happen at all. Whether there is any additional evidence beyond the woman’s allegations remains to be seen. Physical evidence, such as the man’s DNA on the woman’s skirt or underwear, could support her claim. Likewise, whether anyone else witnessed the alleged incident, and whether there were other people in the vicinity at the time the incident allegedly occurred will also likely be a factor in the strength of the Commonwealth’s case. Without physical evidence, other eyewitnesses, or video surveillance, the woman’s allegations might be the only evidence against the man. Whether the prosecution could prove its case could then come down to whether the woman seems credible, or whether she might have had some reason to make up the allegations.

The man may also claim that he was under the influence of alcohol or drugs, or in an altered mental state at the time of the alleged incident. The presence of mental illness and/or intoxication could have resulted in a lack of awareness as to what he was doing, or a lack of ability to control his behavior.

Whatever potential defense(s) the man may raise, his situation will undoubtedly be anxiety provoking, as a conviction for this charge has serious consequences, including up to five years in state prison. Further, a conviction would require the man to register as a sex offender.

If you or a loved one is facing criminal charges like those in this case you will need an experienced and skilled attorney to achieve the best results possible. Contact Attorney Cappetta today for a free consultation.