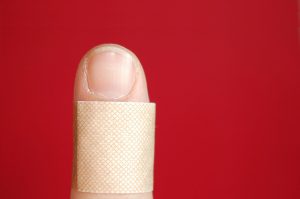 The Appeals Court ruled in Commonwealth v. Sudler that the evidence was insufficient to support the defendant’s conviction of battery with intent to intimidate causing bodily injury, pursuant to G.L. c.265, §39(b) on the ground that the victim’s injury, “two cut fingers,” did not constitute “‘substantial impairment of the [victim’s] physical condition’ as required by the statute.”

The background was as follows. As the victim was walking toward a subway station in South Boston, “he heard a vehicle door slam, heard someone call him ‘faggot,’ and turned to see the defendant and the codefendant talking to him. The defendant continued to taunt the victim by calling him ‘faggot’…. As the defendant and the codefendant walked toward him, the victim noticed that the defendant held a knife in his hand…. The victim pulled out his own knife, an argument ensued, and the defendant ‘took a swing’ at the victim. The victim ‘jumped back’ and ‘took a swing back at [the defendant].’ The parties exchanged words” before separating. “[A]s the victim walked to the station he noticed” that blood was dripping from his hand and that he “‘was just losing a lot of blood.’ [He] … saw that two fingers of his hand had been cut. One cut was located on the victim’s left ring finger, which, according to his testimony, was ‘sliced … [f]rom nearly the top to the joint.’ The other cut was to the middle finger and went ‘from [the] side near the joint from the middle to the end, the corner.’” “Emergency medical services (EMS) … tended to the victim[,]” who “was upset because EMS did not offer him antibiotics or any other services. ‘All they did was basically [give him] a Band Aid.’” On appeal, “[t]he defendant contend[ed] that the evidence was insufficient to prove ‘bodily injury’ as defined under G.L. c.265, §39(b).”

Holding the Commonwealth to its burden of proof and making sure that it can and does prove each and every element of the offense charged is one of the most important functions that a defense attorney serves.  If you or a loved one is charged in a case where there are potential weaknesses in the Commonwealth’s evidence, you will need a skilled and experienced defense attorney to hold the Commonwealth to its burden and exploit any and all issues with its ability to prove the case.  Attorney Daniel Cappetta is a skilled and experienced trial attorney who does not shy away from a fight.  He zealously represents each and every one of his clients and obtains the best resolution possible.  Put his many years of experience to use and call him for a free consultation today.