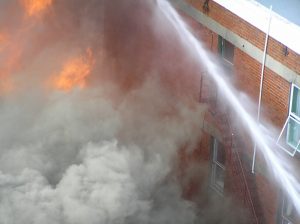 In a recent case, Commonwealth v. Pfeiffer, the Supreme Judicial Court ruled that the judge’s supplemental instruction on arson was erroneous, because it gave the jury the option of convicting on the grounds that the defendant intentionally failed to extinguish or report a fire which had been accidently or negligently set.

The background was as follows. “Following an argument with her boyfriend, the defendant set a bag of his clothes on fire inside their apartment, then fled the building,” “locking the exterior door of the building behind her, and without calling for help or alerting other occupants.” “One person died in the resulting two-alarm fire. Three others, including two firefighters, were injured.” Prior to trial, “the Commonwealth represented that its theory [of arson] was based on the [defendant’s] setting of the fire, not [her] failure to act after the fire was set…. At trial, the Commonwealth largely abided by [that] representation…. However, during the charge conference, the trial judge, without prompting from the Commonwealth, suggested she was inclined based on the evidence to provide the jury with a supplemental instruction that, in its final form, stated” that “‘a person may have the required intent for arson if he or she negligently or accidentally causes a fire and then willfully and maliciously makes no attempt to extinguish it or to report it. In that circumstance, the necessary criminal state of mind for arson … may be formed after the fire starts.’” Over the defendant’s objection, the judge provided the supplemental instruction. On appeal, “the defendant argue[d] that the supplemental instruction was improper because [the arson statute,] G.L. c.266, §1, does not criminalize the wilful and malicious failure to extinguish or report an accidentally or negligently set fire.”

In its decision agreeing with the defendant, the SJC noted that G.L. c.266, §1, “makes it unlawful for a person to ‘wilfully and maliciously set[] fire to, burn[], or cause[] to be burned … a dwelling house.’…. There is nothing in this plain language that suggests that a person is culpable for accidental or negligent conduct…. Indeed, accidentally or negligently set fires cannot form the basis for arson under [the statute]. Moreover, there is nothing on the face of the … statute to suggest that a person is liable for failing to act after accidentally or negligently setting fire to, burning, or causing to be burned a dwelling house. Therefore, the [judge’s] supplemental instruction was erroneous.” Regarding the appropriate consequences for the judge’s error, the Court was divided. The majority opined that reversal was not required; Chief Justice Gants and two other justices dissented. The majority noted that “the Commonwealth … never argued before the jury that the defendant accidentally or negligently set the fire or that she formed the requisite intent after having set the fire.” “Nor could the jury have reached such a conclusion based on any reasonable view of the evidence.” “The Commonwealth consistently argued that the defendant intended to burn the apartment building at the time she set the fire, and … that argument had compelling support in the evidence.” Moreover, stated the majority, even though arson is not a specific intent crime — a conviction requires general intent with malice — “a specific intent instruction was [mistakenly] requested by both parties and utilized by the trial judge.” In other words, the defendant was tried under a standard of intent that was more favorable to her than she deserved.

In an appendix to this decision, the SJC “provide[d] … a model jury instruction for arson of a dwelling house under G.L. c.266, §1,” reflecting the Court’s conclusion that arson is not, as the parties assumed, a specific intent crime, but rather “a crime requiring general intent with malice.”

If you or a loved on is charged with a similar offense, it is of critical importance that you have an attorney who is extremely experienced with this type of criminal charge and who will provide you with the best defense possible.  Attorney Daniel Cappetta has successfully represented many clients charged with similar offenses.  Call him today for a free consultation.