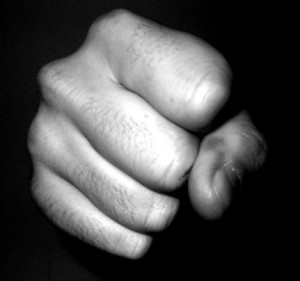 According to an article in the MetroWest Daily News, an Ashland woman was arrested earlier this year after allegedly threatening and assaulting a man. The article states that the woman and her boyfriend were staying at the alleged victim’s house in Framingham. The alleged victim reportedly noticed that his prescription Klonopin was missing and blamed the woman. The woman’s boyfriend then got into a fist fight with the alleged victim. During the fight, the woman allegedly went into the kitchen, grabbed a knife, and threatened to stab the alleged victim. She also reportedly threw a fan at him and hit him with it. The police were ultimately called and found three Klonopin pills in the woman’s purse. The woman was subsequently charged with assault and battery with a dangerous weapon (the fan), assault with a dangerous weapon (the knife), possession of Klonopin, and larceny under $250.

Although the charges against the woman are serious, she appears to have a strong defense to at least some of the allegations. Specifically, as to the assault charges, the woman may well be able to argue that she was acting in defense of another: her boyfriend. Massachusetts law allows people to come to the aid of each other when such action is necessary. Specifically, Massachusetts law allows a person to use reasonable force when it is necessary to do so to help another person. In other words, if it reasonably appears that the person being aided is in a situation where the law would allow him to act in self-defense himself, then a third party can lawfully come to his aid in his defense. The law states that if there is evidence that a defendant may have been coming to the aid of another person, then the defendant must be acquitted of the charges unless the Commonwealth proves at least one of the following to things beyond a reasonable doubt: (1) that a reasonable person in the defendant’s position would not have believed that her use of force was necessary in order to protect the third party; or (2) that to a reasonable person in the defendant’s position would not have believed that the third party was justified in using such force in his own self-defense.

Here, given the fact that the alleged victim was engaged in a fist fight with the woman’s boyfriend, the woman has a strong argument that some use of force was necessary to protect her boyfriend’s physical safety, and that a reasonable person in the woman’s position would have believed that her boyfriend would have been justified in acting in self-defense himself. In particular, the boyfriend was literally being attacked by the alleged victim, and there is no indication that the boyfriend could have safely extricated himself from the situation, or that he used excessive force. As such, the woman has a strong argument that she was justified in acting in defense of her boyfriend. As to the other charges, the woman may likewise have a defense, as it is unclear as to whether she in fact has her own prescription for Klonopin and/or whether the Klonopin that she had in her purse was actually stolen from the alleged victim rather than prescribed or purchased.

Despite the fact that the woman does appear to have legitimate defenses to the charges, she will still need an attorney to persuasively present these defenses to the court and potentially to a jury. If you or a loved one is facing a similar situation, you will likewise need a skilled attorney to handle your case. Attorney Daniel Cappetta has been practicing criminal defense for many years and has helped numerous clients obtain positive results in their criminal cases. Call him for a free consultation and put his expertise to use for you.