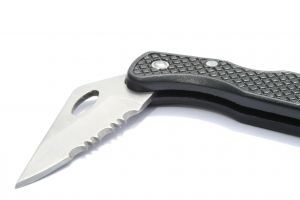 According to an article in the MetroWest Daily News, a Framingham woman reported to police that her drug dealer robbed her at knife point last week. The article specifically states that the woman had arranged to buy marijuana from her dealer, whom she identified as “Florida.” The woman stated that when she showed up to the buy location, Florida allegedly took out a black pocket knife and told her to give him her money. The woman then reportedly gave him $20. According to the woman, Florida began to walk away, but then turned and charged at her with the knife. She called the police to report the robbery as she was running away. The woman was unable to provide the police with Florida’s actual name.

Even if the police are able to identify and apprehend Florida, however, it seems unlikely that they will have much of a case against him. Specifically, the woman appears to have a Fifth Amendment privilege. The Fifth Amendment states that a person cannot be compelled to testify against herself if that testimony is potentially incriminating and/or could result in criminal prosecution. The woman, by her own admission, appears to have engaged in some sort of agreement to purchase drugs. Because the woman could potentially face criminal charges herself, she appears to have a Fifth Amendment privilege and could therefore refuse to testify.

While it could be argued that the Commonwealth would likely not prosecute the woman, the Supreme Judicial Court has made it clear in a recent decision – Commonwealth v. LeClair – that a Fifth Amendment privilege does not depend on whether the prosecutor actually intends to prosecute the case – what matters is whether the witness’ testimony could be used in a criminal prosecution, or could lead to other evidence that might be used against the person. Given the fact that the woman could potentially face a charge of conspiracy, she appears to have a Fifth Amendment privilege. Because the only evidence against Florida would come from the woman, the prosecution appears to have a very difficult case to prove even if Florida is ultimately arrested.

Despite the fact that the prosecution’s case appears to be weak, such weaknesses will not necessarily stop the Commonwealth from issuing charges and asking to hold a defendant on bail. In light of the fact that Florida could still be charged if apprehended, and the fact that the Commonwealth may seek to hold him on a high bail given the seriousness of the allegations, Florida would still need a highly skilled attorney to make sure that his rights were protected, and that he was not held on a case that the Commonwealth would likely be unable to prove. Attorney Daniel Cappetta spent his early years practicing as an Assistant District Attorney and then left the District Attorney’s office to practice criminal defense. As such, he is very familiar with both sides of the courtroom, is in a position to assess the weakness in the prosecutor’s case, and is well versed in arguing those weaknesses to the court on behalf of his clients. Call Attorney Cappetta today and put his unique experience to work for you.