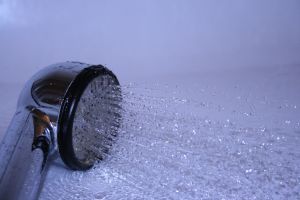 According to an article in the MetroWest Daily News, a Framingham man broke into a home on Charles Street last week and discovered his wife taking a shower with another man. According to the defendant’s lawyer, the defendant and his wife were at their own home earlier that night. Around 1am, the defendant heard a knock at the door. His wife apparently left the house shortly after the knock and the defendant followed her. He managed to track his wife to the Charles Street home and, once there, heard noises that sounded like two people having sex. He then reportedly broke a window in the basement of the house and entered, confronting his wife and the man in the shower. The wife, once caught, reportedly ran through the house naked and climbed through a second floor window to get away. The man jumped to the street and ran away as well, also without his clothes. A third individual – the man’s sister-in-law and the owner of the house – found the defendant in the kitchen. He apparently repeatedly asked “where’s my wife?” in response to the woman’s questions. The defendant was ultimately found outside of the home, “distraught” and holding onto his wife’s clothing, which he had apparently taken from the house. He was charged with unarmed burglary and malicious destruction of property over $250.

In addition to the fact that the defendant is fairly sympathetic in light of the alleged facts of the case, he will also likely have a strong legal defense to the burglary charges. To prove that the defendant committed a burglary under G. L. c. 266, § 15, the Commonwealth would have to prove beyond a reasonable doubt that (1) he broke into the house; (2) entered the house; (3) someone lived in the house; (4) the entry was at night; (5) he entered the house with the intended to commit a felony; (6) he was not armed; and (7) he did not assault any person lawfully in the house. While there seems to be little doubt that the defendant broke into and entered the house, he appears to have a strong argument that he did not do so with the intent to commit a felony. To the contrary, the evidence seems to indicate that he went into the home solely to find his wife – although his wife may not have appreciated the fact that the defendant was following her, it is not a felony to do so. The lack of any intent to commit a felony is further supported by the fact that the defendant, once inside the house, seemed focused only on his wife; he made no attempts to assault anyone, steal anything, or engage in any other sort of criminal conduct inside the home. Rather, he repeatedly asked the sister-in-law where his wife was. The fact that he was found standing outside the home, simply holding his wife’s clothes, distraught, also appears to support this argument.

Although no attorney, no matter how good, can protect the defendant from the emotional consequences of the evening, a skilled attorney may well be able to protect him from the criminal consequences. Attorney Daniel Cappetta understands that being charged with a criminal offense is not only scary, but can also be extremely embarrassing and emotionally difficult. If you or a loved one has been charged in a case that requires discretion and sensitivity, he can help. Call him today for a free consultation.