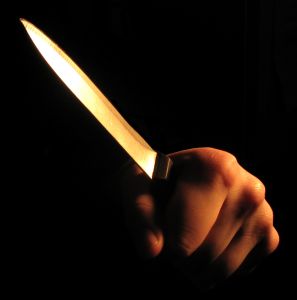 According to an article in the MetroWest Daily News, a Framingham woman seeking to buy marijuana in a Walgreens parking lot allegedly stabbed a man there. The woman called police from the parking lot located on School Street and reported that she had gone to the location to buy marijuana. She further claimed that while she was attempting to buy the drugs, three men got out of a car and tried to stab her. She told the police that the men then drove away. Although it is not entirely clear how, the officers were able to track down the men. Two were stopped in a car, and the third was at MetroWest Medical Center, apparently being treated for a stab wound himself. The driver of the car was arrested for driving under the influence of drugs. All three of the men denied the woman’s version of events, claiming that she had actually tried to stab them. According to the article, the woman became uncooperative as the police began to express doubts about her story. She allegedly struggled as police tried to restrain her and at one point kicked an officer in the leg with her boots. Further, a knife was also found on her person. The woman was ultimately charged with: resisting arrest; assault and battery on a police officer; disorderly conduct; and two counts of assault and battery with a dangerous weapon (a knife and a shod foot).

While the woman may have some trouble challenging the charges stemming from her behavior toward the police, she may well be able to defend against the alleged stabbing. Specifically, the men are the only witnesses to the assault, and it may not be in the men’s best interests to testify. In particular, at least one of the men has a Fifth Amendment privilege against self-incrimination. The Fifth Amendment states that a person cannot be compelled to testify against himself if that testimony is potentially incriminating and/or could result in criminal prosecution. In light of the fact that the driver was charged with driving under the influence of drugs, it may be in his best interest to exercise his Fifth Amendment privilege so that he can avoid being questioned under oath about his own criminal charges. There is also a question as to whether the three men were the people that were going to sell the marijuana to the woman. Although the article does not explicitly state this, it seems like a plausible scenario given the fact that the woman told the police she was there to buy drugs. Additionally, the men, despite being attacked and injured, declined to contact the police themselves, which suggests they may not have been merely innocent bystanders. If the stabbing was in fact the result of some sort of drug deal gone wrong, then testimony about the incident may put all three of the men in a compromising position, and therefore they may all choose to exercise their Fifth Amendment privilege.

Regardless of what the woman may or may not have done, she will need an experienced defense attorney to investigate her case, including getting her side of the story, talking to the witnesses, and checking to see if there is any helpful surveillance footage that captured the incident. If the incident did in fact stem from a drug deal, her attorney can use this information to help defend her.

If you or a loved one is charged with a crime in which the alleged victims engaged in some sort of criminal conduct themselves, you will need an experienced defense attorney to investigate your case just like the woman here. Attorney Daniel Cappetta is such an attorney – he understands the importance of thorough investigation, and that it is the key to a good defense. Call him today for a free consultation.