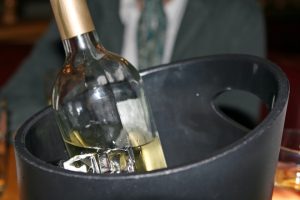 White wine bottle in an ice bucket, macro close up with copy space

According to an article in the MetroWest Daily News, a Framingham woman who was recently arrested for operating under the influence sang to the officers that arrested her. The article states that the police reportedly found the woman sleeping in her parked car on Concord Road at 2:45am. The article describes the car as “partially obstructing traffic” and states that it was in a parking spot, but hanging out into the street by “several feet.” The police apparently knocked on the car’s windows in an attempt to rouse the woman but were unsuccessful. The police then opened the car doors and yelled at the woman to wake her up. When she did awaken, she began singing to the officers and reportedly made several sexual gestures. One of the officers asked the woman if she had taken any drugs to which she responded “I don’t know what I took, but I took something.” She also admitted to having between eight and twelve glasses of wine. It is unclear when she may have taken any substances, and/or when she drank the wine. The officers also had her perform some field sobriety tests. Although the article states that the woman reportedly failed the tests, there is no further information as to what tasks she may have performed incorrectly. The police ultimately charged the woman with driving under the influence under  G. L. c. 90, § 24, and civilly cited her for obstructing traffic.

For the Commonwealth to obtain a conviction against the woman for this offense, it would have to prove the following beyond a reasonable doubt: (1) that the defendant operated a motor vehicle; (2) that she did so on a public way; (3) that while operating the vehicle, the defendant was under the influence of intoxicating liquor. As to the first element, a person “operates” a motor vehicle not only while doing all of the well-known things that drivers do as they travel on a street or highway, but also when doing any act which directly tends to set the vehicle in motion. The law is that a person is “operating” a motor vehicle whenever he or she is in the vehicle and intentionally manipulates some mechanical or electrical part of the vehicle — like the gear shift or the ignition — which, alone or in sequence, will set the vehicle in motion.

Here, the defendant appears to have several arguments in her defense. First, the evidence appears to be somewhat thin in relation to the operation element. There is no indication the car was even turned on, let alone that the defendant was “intentionally manipulating” any mechanical or electrical part of the vehicle. Second, although the prosecution may try and argue that the defendant must have operated the vehicle prior to parking the car, there is no indication that the woman took any drugs, or drank the wine, before she parked the car. The article does not indicate that the police asked the woman where and/or when she had either of these substances, and therefore there is a real question as to when she could have come under the influence of either substance vis a vis when she operated the car.

Even though the woman does have some defenses to raise, the Commonwealth will still make an argument based on the circumstantial evidence that the woman was in fact operating under the influence. In order to protect her from a potential conviction on her record and the suspension of her driver’s license, she will need a skilled attorney who is well versed in OUI defenses and who will present a cogent and persuasive argument to the jury. If you or a loved one is facing similar charges, you will likewise need an experienced and capable Massachusetts criminal defense attorney on your side. Attorney Daniel Cappetta is such an attorney – call him for a free consultation today.