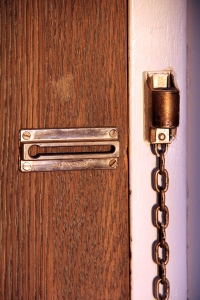 According to an article in the MetroWest Daily News, a Natick man was arrested last week for assaulting a hotel manager in Framingham. The hotel manager reportedly received several complaints from other hotel guests about loud music coming from the defendant’s room around 2:30am. The manager went to the room and knocked on the door, but no one responded. The manager then unlocked the door and attempted to open it. The chain lock was in place, so she yelled into the room. Again, no one responded. The manager then reached into the room and attempted to unlock the chain. When she did so, the defendant allegedly jumped out from behind the door and tried to slam it shut. The manager’s arm was still in the door and got caught as the defendant was attempting to shut it. She had a large lump on forearm as a result, but declined medical attention. The manager then retreated and called the police. When the police arrived, they knocked on the door and told the defendant that he was being kicked out of the hotel. Despite this announcement, the defendant reportedly refused to open the door for the police. Officers forced the door open and arrested the defendant for assault and battery with a dangerous weapon (the door) on a person older than sixty (the manager is sixty years old) and disturbing the peace.

Despite the fact that the defendant’s conduct may have been ill advised, he appears to have possible defenses to the charge. First, he appears to have an argument that his conduct was not in fact reckless. The report does not indicate that any lights were on the room when the manager attempted to enter. The defendant may be able to argue that he merely saw the door to his room opening and did not see that anyone’s arm was actually in the door. Slamming a door, without knowledge that a person’s arm was in the way, is arguably not reckless conduct. Second, the defendant may have an affirmative defense: defense of property. A person is allowed to use reasonable force to remove a trespasser from his property. Here, there is no indication that the manager identified herself when she attempted to enter the room. Therefore, the defendant may be able to argue that he did not know who the intruder was, and simply took reasonable measures to prevent the intruder from entering his hotel room.

Regardless of the defenses the defendant may have, painting a picture of the situation from his perspective will be crucial in winning over the jury. He will need an attorney who can both identify the potential defenses, and successfully execute them. If you or a loved one has been charged with a crime, you will likewise need a skilled attorney who can persuasively present your case to the jury. Attorney Daniel Cappetta has taken many cases to trial and knows how to show a jury that there are two sides to every story. Put his expertise to use for you. Call him for a free consultation today.