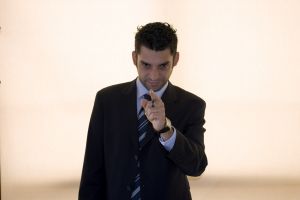 The facts in Crayton are as follows: two students studying in a public library claimed that a man seated near them at one of the library’s computers was looking at nude images of children. Prior to the trial, neither the police nor the prosecutor asked these eyewitnesses to participate in an identification procedure to determine whether they could identify the man they had seen at the computer – they were never shown a photographic array or asked to view a lineup. The first time they were asked to identify the man was on the witness stand at trial, which was more than two years after the first and only time they had seen him. At the trial, the prosecutor asked them whether they saw the man from the library in the courtroom and each of the witnesses identified the defendant.

The SJC held that the requirement set forth in Crayton – that an in-court identification shall be admitted in evidence only where the Commonwealth has demonstrated “good reason” for its admission – would be applicable to circumstances such as those in the Collins case, where the eyewitness participated in an inconclusive pretrial identification procedure. The Court reasoned that “the danger of unfairness arising from an in-court show-up in these circumstances is considerable. Where eyewitnesses before trial were unable to make a positive identification of the defendant or lacked confidence in their identification, they are likely to regard the defendant’s prosecution as confirmation that the defendant is the ‘right’ person and, as a result, may develop an artificially inflated level of confidence in their in-court identification.” Again, the Court stated that the rule shall be applied prospectively.

Mistaken identifications are the leading cause of wrongful convictions in the United States. Therefore, the potential suggestiveness of any identification procedure and resulting identification testimony is an enormous concern for the criminal justice community. These two decisions bring us one step closer to preventing injustices resulting from mistaken identification. If you or a loved is charged in a case where identification is an issue, you will need an experienced attorney who is up to date on the state of the law and who can make sure that your rights are protected. Attorney Daniel Cappetta has handled numerous misidentification cases and can help you get the best outcome possible for your charges. Call him for a free consultation today.