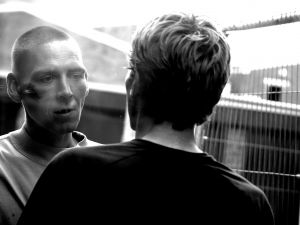 While both defendants are claiming that they were defending themselves and could therefore decide to waive their Fifth Amendment privileges, testify against each other, and raise self-defense as an affirmative defense to the respective charges levied against them, this seems unlikely. Cross-complaint cases tend to be dismissed, as people generally do not want to waive their respective privilege and take the risk of their testimony being used against them in their own criminal case.

Further, although a person is allowed to act in self-defense, the Commonwealth can combat such a claim by establishing that a defendant (1) did not reasonably believe that he was being attacked or immediately about to be attacked and that his safety was in immediate danger; or (2) did not do everything reasonable in the circumstances to avoid physical combat before resorting to force; or (3) used more force to defend himself than was reasonably necessary in the circumstances. Given the fact that both defendants appear to have been able to do more to avoid physical combat, waiving their Fifth Amendment privileges may be a particularly risky course of action, giving them both that much more incentive to simply assert their respective privileges.

No matter what they choose to do, both defendants will need the help of an experienced defense attorney to advise them of their options and figure out what the best course of action is for them. Attorney Daniel Cappetta is a former prosecutor, and has been practicing criminal defense for many years. He has handled cross-complaint cases as an assistant district attorney and for the defense. If you or a loved one is involved in a cross-complaint case, Attorney Cappetta can help you navigate through the process to get the best outcome possible. Call him today.