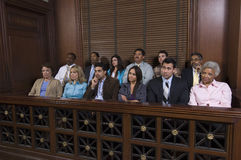 In July of 2015, amendments to the Massachusetts Rules of Professional Conduct took effect. The revisions covered a wide range of issues, including post-trial communications with jurors. Such commuication is specifically governed by Mass. R. Prof. C. 3.5(c). The revised rule now permits lawyers to contact jurors after their discharge without first securing leave of court (as was previously required by the old rule) so long as (i) the communication is not otherwise prohibited by law or court order, (ii) the juror has not made known to the lawyer (directly or otherwise) a desire not to communicate with the lawyer, and (iii) the communication involves no misrepresentation, coercion, duress or harassment.

In a recent case – Commonwealth v. Moore – the Supreme Judicial Court considered the application of the new rule. The SJC specifically responded to five questions reported by a Superior Court judge concerning the effect of the 2015 amendment to Rule 3.5(c), and whether it overruled certain holdings from prior case law governing the issue of post-trial communications with jurors, names Commonwealth v. Fidler, 377 Mass. 192 (1979). In Fidler, the SJC specifically announced the rule that required all “post-verdict contact with and interviews of jurors by attorneys to occur under court supervision and direction, and to be permissible ‘only if the court [were to find] some suggestion that there were extraneous matters in the jury’s deliberations…. [C]ounsel, litigants, and those acting for them [were prohibited from] independently contact[ing] jurors after a verdict [was] rendered.”

The facts of Moore are as follows: the defendant had a trial by jury in 2012 and was convicted of four offenses, including first-degree murder.  During the course of the trial, issues regarding possible exposure of the jurors to extraneous influences arose. In 2015, two weeks after the effective date of the amendment to Rule 3.5(c), Moore’s appellate attorney communicated by mail with the jurors who had deliberated at Moore’s trial. “[T]he Commonwealth [then] filed an emergency motion for judicial intervention to prohibit post-conviction inquiry of the jury.” After a hearing, the judge reported to the Appeals Court the five questions at issue here.

The five reported questions and the SJC’s responses to them were as follows. Question 1: “‘In revising Rule 3.5 of the Massachusetts Rules of Professional Conduct to permit attorney originated communications with discharged jurors, did the Supreme Judicial Court implicitly overrule the prohibition against attorney originated communications with jurors as set forth in Commonwealth v. Fidler, 377 Mass. 192, 203-204 (1979)?’” SJC’s response: “[W]e answer the first reported question in the affirmative: by adopting rule 3.5 (c), we effectively overruled our rule, first stated in Fidler, that prohibited attorney-initiated, post-verdict contact of and communications with jurors free from court oversight…. To the extent that the Fidler rule operated to define a manner of contact and communication with jurors post-verdict that was ‘prohibited by law’ before the adoption of rule 3.5 (c), the latter effectively superseded the Fidler rule and the prohibition against unsupervised, post-verdict attorney communication that the Fidler rule had imposed. This is not to say, however, that rule 3.5 (c) implicitly overruled this court’s opinion in Fidler in its entirety, a point that leads us to the second reported question.”

Question 2: “‘In generally adopting the American Bar Association’s Model Rule 3.5 containing the language ‘prohibited by law,’ did the Supreme Judicial Court intend Commonwealth v. Fidler to be continuing precedent?’” SJC’s response: “Our answer is yes…. Fidler, in addition to establishing the rule of conduct relating to unsupervised post-verdict contact with jurors by attorneys, discusses and reaffirms the court’s continuing adherence to the common-law principle barring inquiry into the contents of jury deliberations and thought processes of jurors and the impeachment of jury verdicts based on information that might be gained from such inquiry…. Our adoption of rule 3.5(c) leaves the viability of this common-law principle undisturbed.” “As Fidler notes, however, inquiry is permissible to establish the existence of an improper influence, ‘but … not … to show the role which the improper influence played in the jury’s decisions.’ Id. at 196.”

Question 3: “‘If the answer to question two is ‘no,’ then what types of contact with discharged jurors by an attorney, if any, are ‘prohibited by law’ under Rule 3.5(c)(1)?’” SJC’s response: “We answer that prohibited contact and communication include those that violate common-law principles, such as inquiries into the substance of jury deliberations, and communications that violate statutory law, other court rules, or specific court orders.”

Question 4: “‘If the answer to question one is ‘yes,’ and the answer to question two is ‘no,’ does revised Rule 3.5 permit attorneys to communicate with jurors who were discharged prior to July 1, 2015 [the effective date of the amendment to the rule]?’” SJC’s response: “Rule 3.5 (c) generally applies to attorneys in their representation of litigants in trials on and after July 1, 2015, but an attorney representing a party in a case that was tried to a jury and concluded before that date may contact jurors on that case pursuant to rule 3.5 (c) if the case was pending on appeal as of July 1, 2015, or the appeal period had not run as of that date.”

Question 5: “‘If the answer to question four is ‘yes,’ in light of Commonwealth v. Fidler, are attorneys required to seek approval from the court prior to contacting jurors?’” SJC’s response: “We answer the question no. As is the case with attorneys who, pursuant to rule 3.5 (c), seek to communicate, post-verdict, with jurors discharged after July 1, 2015, attorneys who seek post-verdict contact with jurors who were discharged before July 1, 2015, may do so without permission from the court. However, and again as is true of attorneys seeking contact with jurors discharged after July 1, 2015, any proposed contact is subject to [a] notice requirement,” i.e., an attorney planning to communicate with jurors must notify the opposing party (or counsel) of her intention to do so.

Although inquiries cannot be made specifically into the content of juror deliberations, the fact that it is now possible to freely communicate with jurors and ask them about their impressions of a case is extremely helpful. Knowing what evidence they found to be persuasive, what they thought about various aspects of the trial, and what they believed to be most effective (and ineffective) in terms of case presentation is an extremely useful tool that attorneys can now utilize.

If you or a loved one is facing a criminal charges and anticipate going to trial, you too can reap the benefit of this change to the rules. Attorney Daniel Cappetta is an experienced trial attorney who is always looking to use creative ways to advocate for his clients, and maximize his effectiveness. Call him for a free consultation and find out what his skills and creativity can do for your case.