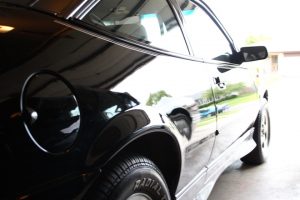 The Supreme Judicial Court recently issued a decision – Commonwealth v. Campbell – affirming the allowance of the defendant’s motion to suppress on the ground that his operation of the vehicle, which had been rented by his mother, did not constitute use without authority under G. L. c. 90, § 24(2)(a), and therefore the police had no lawful basis to seize the vehicle and conduct an inventory search.

The basic facts were as follows. A state trooper “stopped [the] vehicle … for failing to stop at a stop sign. The trooper determined that the vehicle had been rented by the defendant’s mother, who has a last name that is different from the defendant’s. Upon request, the defendant provided [the trooper] with a valid driver’s license and the rental agreement. The agreement listed only the mother as the renter and stated, ‘[N]o other drivers permitted.’ [The trooper] concluded that the defendant was using the vehicle without authority, in violation of G.L. c.90, §24(2)(a), which makes it illegal to ‘use[] a motor vehicle without authority knowing that such use is unauthorized.’ Accordingly, [the trooper] decided to impound the vehicle. During an inventory search in preparation for impoundment, a loaded handgun and a box of ammunition were seized from the vehicle.” There was evidence that “upon learning of the seizures, the defendant made incriminating statements to [the] police.” After he was charged with firearm and other offenses, the defendant moved successfully to suppress the physical evidence and his statements.

In its decision, the SJC ruled that the impoundment and inventory search of the vehicle were unlawful because the trooper “lacked probable cause to determine that the defendant was using the rental vehicle without authority.” Noting that it had not previously considered what constitutes use without authority of a rental vehicle, the Court opined that the information on the rental agreement listing the defendant’s mother as the only authorized driver did not, “on its own[,] suppl[y] probable cause to believe that the defendant was using the vehicle without authority.” In the Court’s view, “authorization to use a rental vehicle may be provided by renters as well as by the rental company in at least some circumstances.” The Court explained that the Legislature’s “criminalization of using a vehicle ‘without authority’ … is aimed at protecting the public from harm caused by a user of a motor vehicle who is not readily identifiable. Punishing a person who uses a vehicle with the permission of someone who is in lawful possession of the vehicle, such as a renter, does not advance that purpose, because a user with such permission readily may be identified by the person with explicit authority to use the vehicle.” “A renter’s decision to allow a person who is not a permitted driver according to the rental agreement to drive a rental vehicle may be a breach of that agreement, but it does not also result in a violation of criminal law…. To hold otherwise would expose every parking lot attendant who knows he or she is parking a rental vehicle to potential criminal liability.

Police have historically used this sort of factual scenario as a basis to arrest drivers and search their cars. Now that the SJC has clearly stated that the use of a rental car by someone other than the person on the rental agreement does not constitute a crime, the police will no longer be able to use such information as a pretext to seize and search vehicles. If you or a loved one was arrested and/or had your car searched under similar circumstances, you will need a defense attorney to make sure that the police are not permitted to use any illegally obtained evidence against you. Attorney Daniel Cappetta is an experienced attorney who will make sure that your rights are protected. Call him for a free consultation today.