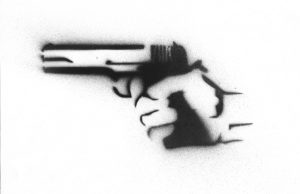 The Supreme Judicial Court recently issued a decision – Commonwealth v. Beal – striking down a portion of the Armed Career Criminal Act  (ACCA).  The ACCA allows for sentencing enhancements for a defendant charged with possession of a firearm under G. L. c. 269, § 10(a), 10(c), or 10(h) if the defendant has previously been convicted of two (1) violent crimes; or (2) drug distribution crimes. A first time violation under the Act carries a minimum mandatory sentence of three years.  A second time violation carries a minimum mandatory sentence of ten years.  A third time violation carries a minimum mandatory sentence of fifteen years.  The SJC’s decision specficially addresses what constitutes a violent crime under the statute.

The facts of the case were as follows: the defendant initially fired two gunshots at a group of people standing on the porch of a house. Two of those people, brothers Joao and Ovidio Pereira, “ran to the back of the house with the defendant chasing after them…. They [then] ran back to the front porch where the defendant … fired several more shots at them. One bullet struck Joao in the lower back,” rendering him “unable to walk without the use of crutches and braces on his legs.” The defendant was convicted of unlawful possession of a firearm; carrying a loaded firearm; unlawful possession of ammunition; assault and battery by means of a dangerous weapon causing serious bodily injury to Joao; and assault by means of a dangerous weapon against Joao and, in a separate count, against Ovidio.  “The indictments charging unlawful possession of a firearm also alleged that the defendant previously had been convicted of two violent crimes and thus was subject to enhanced penalties” under the ACCA.  In a separate trial regarding that matter, the defendant was found guilty on the basis of certified copies of convictions “of assault and battery upon a public employee and assault and battery.” On appeal, the defendant argued that the Commonwealth had failed to establish that both prior offenses constituted ‘violent crimes’ within the meaning of the Act.

In its decision, the SJC noted that under the ACCA, “a ‘violent crime’ is [as defined in G.L. c.140, §121] ‘any crime punishable by imprisonment for a term exceeding one year … that: (i) has as an element the use, attempted use or threatened use of physical force or a deadly weapon against the person of another [force clause]; (ii) is burglary, extortion, arson or kidnapping; (iii) involves the use of explosives; or (iv) otherwise involves conduct that presents a serious risk of physical injury to another [residual clause].’” The Court further noted that the Massachusetts ACCA was essentially similar to the Federal ACCA, whose residual clause had recently been struck down, in Johnson v. United States, 135 S.Ct. 2551 (2015), as unconstitutionally vague. The SJC followed suit, striking down the residual clause of the Massachusetts ACCA as unconstitutionally vague.

Upon invalidating the residual clause, the SJC turned to the question whether the defendant’s previous convictions (of assault and battery and assault and battery on a public employee) qualified as violent crimes under the sole remaining, relevant provision of the ACCA, the “force clause.” The Court noted “that only two of the three variants of common-law battery encompassed by G.L. c.265, §13A — harmful battery and reckless battery — qualify as ‘violent crimes’ under the force clause.” The third variant, “[o]ffensive battery, which ‘can be committed through such de minimis touchings as tickling and spitting,’ is not a violent crime. [Commonwealth v.] Eberhart, [461 Mass. 809,] 818-819 [2012].” The Court concluded that because the certified convictions (the only evidence as to the nature of those offenses presented at the second trial) did not specify which variant of battery was involved, that evidence was insufficient to prove that the defendant’s previous offenses constituted violent crimes “‘for the purpose of sentencing enhancement under [the ACCA].’ Id. at 819.”

The sentencing enhancements under the ACCA are extremely harsh.  Such penalties seem particularly unforgiving for second and third violations – particularly where the predicate offenses are convictions for relatively minor assault and batteries or possession with intent to distribute.  The SJC’s decision to strike the residual clause is one step forward in the fight against draconian and for the most part ineffective minimum mandatory sentencing schemes.  If you or a loved is facing a charge under this statute, you will need a skilled attorney who is up to date on the law and who is prepared to explore every avenue of defense to come up with creative arguments to defend your case.  Attorney Daniel Cappetta is such a lawyer – he always fights to get the best outcomes possible for his clients.  Call him for a consultation today.