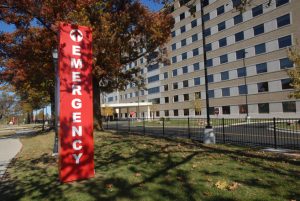 The background was as follows. “[T]he defendant was brought by ambulance and against his will to the [psychiatric area of a hospital’s] emergency department,” where he was detained in a small room. “Although this detention was purportedly pursuant to G. L. c.123, §12, which allows the temporary restraint and hospitalization of persons posing a serious risk of harm by reason of mental illness,” there was “no evidence [at trial] of compliance with the procedures required by § 12(a).” When medical staff in the emergency department told the defendant that “he would likely be held in the hospital for two or three days, the defendant began to shout” that he did not want to be medicated and that he wanted to leave. The staff requested assistance and five security officers arrived. They told the defendant that he would be pepper sprayed if he did not permit medical personnel to medicate him. The defendant, who was six feet, four inches in height and weighed about 270 pounds, responded, “‘[I]f anybody puts their hands on me, I’m going to fuck them up’; and ‘if anybody pepper sprays me I’m going to beat the fuck out of them.’…. Other patients were ‘looking on’; as a precautionary measure, officers directed anyone in the hallway to an alternate route ‘just in case something happened if [the confrontation] spilled out’ of the room.” At some point, as “officers … approached the defendant, [he] ‘put his hands out like he wanted to fight.’ At least three, and as many as six, officers then directed pepper spray at the defendant’s head and face,” thereby subduing him so he could be handcuffed. “There was no evidence … that any aspect of the disturbance … ever extended beyond the confines of the room.”

In its decision, the SJC, “[e]mphasizing the setting-specific inquiry required by our case law,” ruled that the evidence was “not sufficient to permit a reasonable jury to find beyond a reasonable doubt that [as required for a conviction under c. 272, § 53] the defendant consciously disregarded a ‘substantial and unjustifiable risk of public inconvenience, annoyance, or alarm.’” Regarding intent, the Court stated, “[T]he fact that the defendant’s behavior caused officers to reroute and inconvenience people does not mean that the defendant was aware that his behavior had this effect, and acted in conscious disregard of its occurrence.” “Moreover, quite apart from the element of intent, in the context in which they took place, the defendant’s actions [did] not amount to the sort of ‘public inconvenience, annoyance, or alarm’ that … c. 272, § 53, targets.” “His behavior in the emergency department did not attract the crowd of onlookers that typifies public disturbance under our law…. All the evidence shows is that the behavior was witnessed and experienced by the hospital’s treating staff attending the defendant and the security officers called in by the staff.” Although “[t]he evidence would permit a finding that unquantified ‘other’ patients may have observed the defendant’s loud and aggressive behavior in his room[,] ‘other’ patients looking in on a patient arguably out of control in a small hospital room does not qualify as the kind of public disturbance that § 53 is intended to address. Indeed, … a patient’s resistance to detention and medication would seem to be the kind of disruption a psychiatric area in the hospital’s emergency department is designed to absorb…. [C]riminal charges of disorderly conduct in the context of mental health treatment in the emergency department of a large urban hospital, although not per se unavailable, should be rare. To decide otherwise risks criminalizing mental illness in the very treatment centers where help must be available.”

If you or a loved one is charged with a crime and has a mental illness that may have played a role in the offense, you will need an experienced lawyer to assess your case and determine how the mental illness may impact the defense of the case. Attorney Daniel Cappetta has worked with numerous clients who have struggled with mental health issues and is committed to helping each and every one of them get the best possible outcome. Call him for a free consultation today.