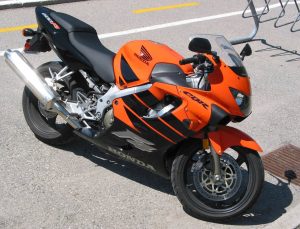 In Collins v. Virginia, the U. S. Supreme Court ruled that “the automobile exception [to the Fourth Amendment’s warrant requirement] does not permit [a police] officer without a warrant to enter a home or its curtilage in order to search a vehicle therein.”

The background was as follows. An officer “saw the driver of an orange and black motorcycle with an extended frame commit a traffic infraction. The driver eluded … [the officer’s] attempt to stop the motorcycle.” Subsequently, the police “learned that the motorcycle likely was stolen and in the possession of petitioner … Collins. After discovering photographs on Collins’ Facebook profile that featured an orange and black motorcycle parked at the top of the driveway of a house, Officer Rhodes tracked down the address of the house, drove there, and parked on the street.” From his cruiser, “Rhodes saw what appeared to be a motorcycle with an extended frame covered with a white tarp.” Although Rhodes did not have a warrant, he “walked onto the residential property and up to the top of the driveway to where the motorcycle was parked. In order ‘to investigate further,’ … [he] pulled off the tarp, revealing a motorcycle that looked like the one from the speeding incident…. Rhodes … returned to his car to wait for Collins. Shortly thereafter, Collins” entered the house. Rhodes knocked on the front door of the house and Collins answered. During the ensuing conversation, Collins “admitted that the motorcycle was his and that he had bought it without title…. Rhodes then arrested Collins.” After the return of an indictment charging Collins with receiving stolen property, he filed a motion to suppress “the evidence that … Rhodes had obtained as a result of the warrantless search of the motorcycle. Collins argued that … Rhodes had trespassed on the curtilage of the house to conduct an investigation in violation of the Fourth Amendment.” The judge denied the motion and Collins was convicted. On appeal, the Supreme Court of Virginia ruled that the denial of the motion to suppress was proper under the automobile exception to the warrant requirement. Collins sought certiorari.

In its decision reversing the judgment of the Supreme Court of Virginia, the U. S. Supreme Court noted that the portion of the driveway where Rhodes searched Collins’ motorcycle was part of the curtilage of the house and, therefore, was considered “to be “‘part of the home itself for Fourth Amendment purposes.”’ [Floridav.] Jardines, 569 U. S. [1,] 6 [2013] (quoting Oliverv. United States, 466 U. S. 170, 180 [1984]).” “When a law enforcement officer physically intrudes on the curtilage to gather evidence,” that “conduct … is presumptively unreasonable absent a warrant.” Here, stated the Court, “[i]n physically intruding on the curtilage of Collins’ home to search the motorcycle, Officer Rhodes not only invaded Collins’ Fourth Amendment interest in the item searched, i.e.,the motorcycle, but also invaded Collins’ Fourth Amendment interest in the curtilage of his home. The question before the Court is whether the automobile exception justifies the invasion of the curtilage. The answer is no.” “[A]n officer must have a lawful right of access to a vehicle in order to search it pursuant to the automobile exception. The automobile exception does not afford the necessary lawful right of access to search a vehicle parked within a home or its curtilage because it does not justify an intrusion on a person’s separate and substantial Fourth Amendment interest in his home and curtilage.”