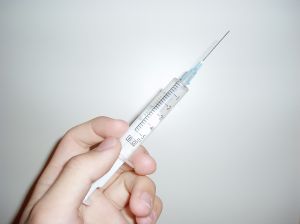 According to an article in the MetroWest Daily News, police officers found a woman using drugs in a school parking lot in Hopkinton earlier this week. The article states that a Hopkinton officer noticed a car parked in a school parking lot around 2am on Tuesday morning. The officer stopped to investigate and observed the woman sitting inside the vehicle, nodding in and out of consciousness. The woman had something tied on her arm as a tourniquet, which, according to the article, is a practice common among intravenous drug users. The officer could also see a hypodermic needle inside the vehicle. The officer knocked on the window and the woman made an attempt to hide the needle, and a bag of what the officer believed to be heroin. The officer then arrested the woman and searched the car, finding an additional six small bags of heroin. The woman was charged with several drug related crimes, including possession with intent to distribute, possession, and a school zone violation.

To convict the woman of possession with intent to distribute under G. L. c. 94C, § 32, the Commonwealth would have to prove the following beyond a reasonable doubt: (1) that the substance was in fact heroin; (2) that the woman possessed some amount of the heroin with the intent to distribute it to another person; and (3) that she did so knowingly or intentionally. As to the second element, the Commonwealth must specifically prove that the heroin was not solely for the woman’s own use, but rather that it was intended for distribution to others. The following factors may be considered in determining whether the heroin was for distribution rather than personal use:

To convict the woman of a school zone violation under G. L. c. 94C, § 32J, the Commonwealth would have to prove the following beyond a reasonable doubt: (1) that the woman committed the offense of possession with intent to distribute within 300 feet of a school; (2) that this offense was committed between 5am and 12am.

Fortunately for the woman, she appears to have a very strong defense of straight possession. Specifically, given the fact that she was clearly using the heroin, she has a strong argument that she had no intention of distributing it to anyone else but rather intended to ingest all of it herself. Although the officers found a total of six bags of heroin in the car, the article indicates that all six were small bags. Further, the evidence gathered as a result of the police investigation is utterly devoid of any other indication of distribution – there was no additional evidence of drug dealing, such as packaging materials, money, or the like, and the officers did not witness any activity that would suggest that a drug sale was in progress. Moreover, the school zone charge only comes into play if the Commonwealth successfully proves that the woman possessed the heroin with the intent to distribute it; there is no school zone violation for possessing heroin near a school. Last but not least, even if the Commonwealth succeeded in convincing a jury that the woman possessed the heroin with the intent to distribute it, the school zone statute clearly indicates that the crime must be committed between 5am and 12am. Since the woman was found in the parking lot at 2am, it appears that the Commonwealth will be unable to meet its burden on the school zone charge, regardless of whether it prevails on the other charges.

Despite having a strong defense to the more serious charges, the Commonwealth still appears to have a good case against the woman for possession. In addition to the criminal case against her, it also seems fairly clear that the woman has a substance abuse issue. Therefore, she will not only need an experienced defense attorney to present her defense, but she will also potentially need some assistance with her substance abuse so that she can avoid being found in similar circumstances again in the future.

Attorney Daniel Cappetta has been practicing criminal law for many years and has handled and successfully defended numerous drug cases. He also understands that individuals with substance abuse issues face many challenges, both within the criminal justice system and beyond. Attorney Cappetta seeks to help clients like the woman in this case inside and outside the courtroom. If you or a loved one is facing drug related charges, call him today for a free consultation.