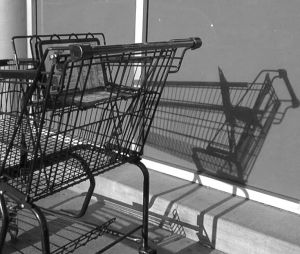 A recent article in the MetroWest Daily News tells the story of a Bellingham man who was charged with larceny of property over $250 and disorderly conduct on Wednesday, December 12th following a chase through Wegmans and onto Shops way at about 5 p.m. The man allegedly attempted to steal $400 in baby formula. Store security employees allegedly saw the man load several small empty plastic bags from the produce section into his cart, then stuff 22 containers of baby formula into the empty bags. Employees reportedly believed the man was trying to make it look like he had already paid for the items. Store security allegedly alerted the police who came to Wegmans.

Police reportedly waited in their cruisers outside of the store. When the man got close to the exit, police reportedly saw him quickly turn and walk back into the store, leaving his cart behind. Officers then reportedly followed the man into the store. When the police identified themselves as officers, the  man allegedly ran from them. The officers reportedly chased him through the store and outside for a few hundred yards after the man allegedly ran out the emergency exit. Officers finally caught the man and he was arraigned at Westborough District Court on Thursday, December 13th.

The man has been charged with larceny over $250, which is a felony in the Commonwealth of Massachusetts. Grand larceny, or larceny of over $250, is punishable by up to five years in state prison, a fine of up to $25,000, or imprisonment in jail for up to two years. In order to prevail on the charge, prosecutors will have to prove that the man did steal, take, and carry away the property of another, that the property had a value of more than $250, and that the man specifically intended to permanently deprive the owner of the property.

There are a number of defenses that can be used when facing a larceny charge. One of the common defenses is to try to get the felony charge reduced to a misdemeanor charge by fighting the alleged amount of the property. Prosecutors must prove beyond a reasonable doubt that the property was valued at $250 or more. Therefore, it is often possible to get the charged reduced to petty theft, or larceny under $250.

In this case, the man may be able to argue that he never left the store with the property. Prosecutors may face difficulty with proving the first requirement–that he did steal, take, and carry away the property of another. If the man argues this point, prosecutors may have a hard time proving that this element beyond a reasonable doubt. He could also argue against the identification by store employees or police.

The man is facing a serious felony charge that could result in incarceration. He needs a skilled and experienced Massachusetts criminal defense attorney to defend him. If you are facing larceny charges, contact me for a free consultation.