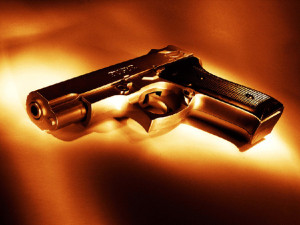 According to an article in the MetroWest Daily News, a man was recently charged with possession of a firearm found in a Framingham apartment. The article states that this past Tuesday, the police were called to the home for assistance with a “disturbed” person. When the police arrived, they were met by the defendant and his girlfriend, who both reported that the girlfriend’s mother was there and that she was “crazy.” The mother was transported to MetroWest Medical Center for a psychological evaluation. As she was being taken for medical treatment, she reportedly yelled to her daughter “you know there’s a gun in the apartment and you know it’s loaded.”

Following the mother’s statement, the police spoke with the girlfriend. She told the police that there was no gun in the apartment. The defendant, who does not reside in the apartment (although he has previously listed the apartment as his address in the past) told the police that he needed to go upstairs. When the police instructed him not to do so, he said that he “needed some air” and then left. After his departure, the police again questioned the girlfriend about the gun and at that point, she allegedly told them that it was under the bed. The police then searched the apartment and located a gun in a sock under mattress. They also recovered a magazine with one bullet. The girlfriend told the police that the gun belonged to the defendant. The police issued a warrant for the defendant, whose whereabouts were then unknown. They also determined that the gun had been stolen in Virginia approximately eight years prior. The police eventually found and arrested the defendant and he was arraigned on the following charges: unlawful possession of a firearm without a firearm identification (FID) card; possession of ammunition; improper storage of a gun; storing a gun where a minor could access it; and receiving a stolen gun.

Although the charges are certainly serious, the defendant does appear to have a defense: namely that the gun did not belong to him. According to the article, the defendant does not reside at the address where the gun was found. One would think that if someone were going to keep an illegal firearm, he would not risk leaving it at someone else’s house, but rather would keep it at home, in a more secure location. Further, other than the girlfriend’s statements implicating the defendant, there is no other evidence that he was in possession or even aware of the firearm. The girlfriend’s mother said nothing about whom the gun belonged to – to the contrary, the article indicates that she yelled to her daughter about the gun, not the defendant. Additionally, there does not appear to be any forensic evidence linking the defendant to the gun – the article makes no mention of any fingerprints or DNA evidence that may have been recovered. The Commonwealth may attempt to subpoena the girlfriend to testify to the statements that she made to the police implicating the defendant. The girlfriend, however, plainly has a Fifth Amendment privilege, as she herself could be charged with possession of the gun, and therefore she could potentially refuse to testify. Therefore, the defendant may be able to successfully argue that the gun was not in his possession and/or that he was not aware that the gun was there.