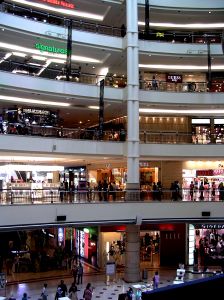 According to a recent article by Norman Miller at the MetroWest Daily News, a 32 year old Framingham woman is facing charges after allegedly taking three teenagers, including two of her children, shoplifting with her at the Natick Mall on Friday, July 26th. The defendant also reportedly had a 3-year old and 1-year old child with her in a stroller.

The defendant was arrested Friday at approximately 6:00 p.m. after store security at J.C. Penney allegedly caught her leaving the store with more than $740 worth of goods that she allegedly stole with the three teens.

Store security had reportedly been watching the defendant and the teenagers because they allegedly recognized them from a past shoplifting incident. The defendant and two teenage girls allegedly took several pieces of clothing into a dressing room and then emerged empty-handed two different times. Security personnel reportedly found price tags and empty clothes hangers in the dressing room. The teenage boy allegedly took several pairs of earrings and put them in his pocket.

After the woman and girls left the dressing room the second time, the group reportedly left, but security stopped them. The goods were allegedly found in the stroller that the group was using for the children.

The defendant is facing serious charges, including a felony charge. If she were indicted and tried in the superior court she could be facing up to 5 years in prison and significant fines. If convicted, these charges will have lasting repercussions and affect her life for a long time to come. In order to prevail on the misdemeanor charge of contributing to the delinquency of a child, prosecutors will have to prove that she knowingly or wilfully encouraged, aided, or contributed to a child under the age of 16 to violate a law. To prevail on the larceny charge, prosecutors will have to prove that the defendant took and carried away property that was owned by someone else and that she did so with the intent to deprive that person of the property permanently.

The teenagers are also facing serious charges, including a felony. Being convicted of a felony at such a young age can affect a person’s life well into the future and impact his or her ability to fulfill aspirations of college and career success.