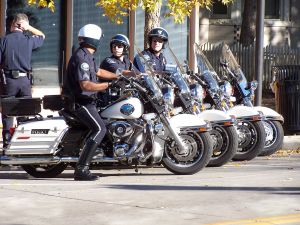 According to an article in the MetroWest Daily News, a 45 year old man from Marlborough was arrested on Sunday, July 28th after he allegedly pushed a police officer who was responding to an unruly crowd. Police were reportedly called to 130 Bolton Street at 10 p.m. on Sunday for a fight in the street. One officer was reportedly trying to control a crowd of approximately 15-20 people who appeared to be intoxicated and had begun to surround two police officers. The officer reportedly tried to move the crowd away from the officers and pushed some of them out of the way when the people continued to get closer to the officers. The officer was then allegedly pushed from behind by the defendant. While officers were arresting the defendant, the crowd reportedly continued to yell, as well as to push and grab officers. The situation was reportedly chaotic and out of control.

The defendant was charged with assault and battery on a police officer, resisting arrest and disorderly conduct. The court set the defendant’s bail at $500 during an arraignment Monday July 29th at Marlborough District Court.

From the description given in the article, it seems as though the situation was quite chaotic and confusing. It is hard to know how an officer could be certain about who was being unruly in the crowd and other factors. The defendant may have a viable defense against his charges. Prosecutors will have to prove that the defendant was the person in the chaotic crowd who pushed the officer, which may be difficult if the situation was truly as chaotic and confusing as has been reported.

If the defendant is convicted of assault and battery on a police officer, he could be facing penalties including jail time.

If you or a loved one is facing a charge of assault and battery, resisting arrest, or disorderly conduct, contact Massachusetts attorney Dan Cappetta today for a free consultation.