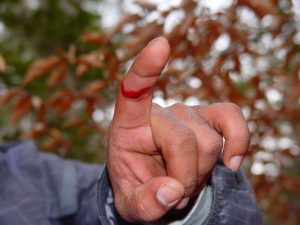 In an atypical decision, the SJC declared that the case of Commonwealth v. Salazar “presents one of the rare situations” in which the Court should reduce the defendant’s first degree murder conviction to a second degree murder conviction, pursuant to G.L. c.278, §33E, even though the evidence was sufficient to support the first degree guilty verdict, because such a result would be more consonant with justice.

The background was as follows. In the evening on the date of the killing, the defendant appeared at the door of a fire station. “His clothes … were covered in blood. The lone injury [that] firefighters discovered was a minor laceration [on the defendant’s hand] that was not bleeding heavily.” The defendant was transported to a hospital. “Subsequent investigation led police to the defendant’s home…. On entry into the … third-floor apartment, police discovered the victim lying dead on the floor” in a pool of blood. The victim’s injuries included several stab wounds, “the most lethal” of which had cut “the victim’s carotid artery and his jugular vein.” Police observed reddish-brown stains which “created a trail from the area of the victim’s body … through the kitchen, onto the back porch, over the third-floor railing and down to the railings on the second and first floors, through the backyard, … over a chain-link fence,” and “through nearby streets, eventually leading to the fire station. DNA testing identified the victim’s blood as a possible source of many of these reddish-brown stains and other stains on the defendant’s clothing. “The defendant testified in his own defense and denied killing the victim. He stated that the victim was “almost like my brother” and that the two had spent the day of [the killing] together in the apartment cooking and drinking beer…. The defendant testified that [at some point he fell asleep on the couch and was later] awakened by loud voices.” He “saw two strange men inside the apartment arguing with the victim. One of the men had a knife and began stabbing the victim, causing the defendant to intervene. The defendant said that he was then beaten by the two men and fled the apartment, going directly to the fire station to find help.” There was evidence that at the hospital the defendant’s “breath smelled of alcohol, and his eyes were bloodshot.” At the defendant’s request, “the judge instruct[ed] the jury on intoxication as relevant to both intent and deliberate premeditation.”

After his conviction of first degree murder, “[t]he defendant filed a motion for a new trial … asserting ineffective assistance of counsel based on trial counsel’s failure to introduce medical records” from the hospital, indicating that the defendant had a very high level of intoxication, including a breathalyzer reading of 0.298. “Trial counsel [attested] that her failure to introduce [the] medical records … was … an oversight on her part.” The judge ruled that this oversight was error, but that it “did not warrant a new trial … because the jury heard “substantial evidence of intoxication … and received full instructions to consider the defendant’s voluntary intoxication on the questions of intent and deliberate premeditation.” The motion judge noted that trial counsel, despite her mistake, skillfully sought to “soft-pedal” the intoxication defense. In other words, she attempted to present evidence of the defendant’s intoxication without undermining his claim to innocence. The defendant’s appeal from the judge’s ruling was consolidated with the direct appeal.

If you or a loved one has been convicted of a criminal offense, you will need an appellate attorney who leaves no stone unturned, and who is willing and able to make any and all appropriate arguments to overturn the conviction.  Attorney Daniel Cappetta has substantial appellate experience and always does what it takes to make sure his clients get the best possible outcome.  Call him for a free consultation today.