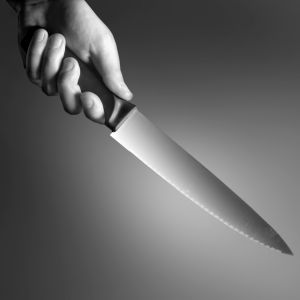 According to an article in the MetroWest Daily News, a man was recently arrested in Framingham for allegedly assaulting three other individuals in alley behind the Tedeschi’s on Waverly Street. The article states that the man reportedly lunged at one of the alleged victims while armed while a knife. At some point, the police were contacted and arrived on scene. When the got there, they reportedly ordered the man to drop the knife. Although the man approached the officers before doing so, he ultimately dropped to his knees and put the knife on the ground. The man was taken into custody and brought to the police station where he was booked. At the arraignment, his attorney told the court that the other individuals involved in the incident had in fact attempted to rob the man and that he had simply been acting in self-defense. It is also of note that the man’s nose was broken when the police arrived on scene, and that the police report failed to include any statements from the alleged victims, or any motive as to why the man would have assaulted them.

For the Commonwealth to obtain a conviction against the man for assault with a dangerous weapon under G. L. c. 265, § 15B, it would have to prove the following beyond a reasonable doubt: that (1) the man intended to commit a battery – that is, a harmful or an unpermitted touching – upon the alleged victims; (2) the man took some overt step toward accomplishing that intent; (3) the man came reasonably close to doing so; and (4) the assault was done by means of a dangerous weapon.

Given the alleged facts, it appears that the Commonwealth may have several problems proving its case. First and foremost, the man may in fact have simply been acting in self-defense after being attacked. Specifically, a person is allowed to act in self-defense and if evidence of self-defense is present, then the Commonwealth must prove beyond a reasonable doubt that the man did not act in self-defense. To do so, the Commonwealth must demonstrate one of the following things beyond a reasonable doubt: (1) that the man did not reasonably believe that he was being attacked or immediately about to be attacked and that his safety was in immediate danger; or (2) that the man did not do everything reasonable in the circumstances to avoid physical combat before resorting to force; or (3) that man used more force to defend himself than was reasonably necessary in the circumstances. Considering the fact that the alleged victims may have initiated the confrontation, in conjunction with the fact that the man was obviously injured, there may be sufficient evidence for the man to argue that he reasonably believed that he was being attacked. Likewise, it does not appear that any of the alleged victims were in fact injured, which suggests that the man merely threatened the alleged victims with the knife, arguably in an attempt to get them to leave him alone. As such, the man may have an argument that it was reasonable to use the threat of force in order to protect himself. Finally, the man also appears to have some argument that he did not use excessive force in light of the fact that he never touched the alleged victims with the knife, rather he arguably used the knife in an attempt to scare them away.

Regardless of any defenses that the man may raise, he will still need a highly skilled attorney to conduct the necessary investigation in the case and present it to the jury. Attorney Daniel Cappetta spent his early years practicing as an Assistant District Attorney and then left the District Attorney’s office to practice criminal defense. As such, he is very familiar with both sides of the courtroom and knows how to argue successfully on behalf of his clients. Call Attorney Cappetta today for a free consultation.